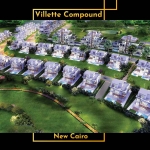 the most prestigious as well as the undisputed best in New Cairo,

where it is located in the Fifth Settlement. The location of the Villette Sodic project,

Fifth Settlement, and is available for sale,

as well as excellence through the site.

And where Villette has the best locations in New Cairo.

It is located across from 90th Street.

And also a few minutes away from the American University in Cairo.

As well as very close to the most important roads as well as the main axes.

Where it is located in the Fifth Settlement

The area that has been implemented in the project is 300 acres.

Whereas, the prices of units in Villette compound start from 1,920,000 pounds.

The developing company of the project is Sodic Real Estate.

The Villette Compound is designed in the style of Sky Condos.

Whereas, the residential units in Villette project have open glass facades.

they are at the top of Sodic’s real estate development interests.

with integrated services as well as facilities, including:

Lots of parks as well as landscaping.

And there are many different swimming pools for ages for men as well as women.

Sports grounds abound, as well as playgrounds for squash lovers.

There is also a different group of recreational games for different ages.

There is a mosque.

And there is a church.

And also a full-service pharmacy.

As well as a group of clinics and medical centers.

And also has private parking.

There is also a huge shopping mall.

And there are areas designated for storage in the compound.

There is security and guard throughout the day.

Villette Sodic Fifth Settlement project has been settled on an area of ​​approximately 300 acres.

The units vary between twin houses as well as townhouses and separate villas.

Where the units space in Villette Sodic Compound starts from 183 square meters.

And there are units that reach 979 square meters.