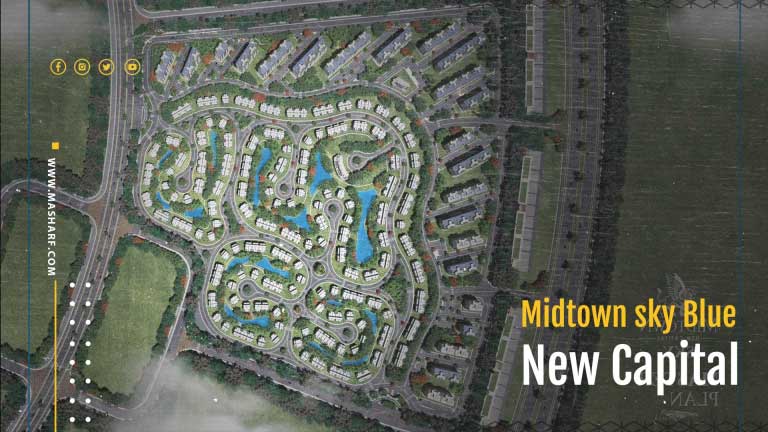 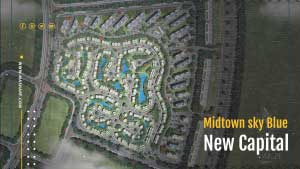 Midtown Sky Compound New Capital, or as it is known as Midtown Sky

projects, especially in the Administrative Capital, which had the lion’s share of it.

estate projects within the Administrative Capital, and they were not simple

In Addition, All of them were projects of a very high degree of efficiency and distinction at

the level of design or implementation, which contributed mainly to their

success, other than that of the distinguished location.

The Midtown Sky New Capital, which is the fourth Midtown project,

came to confirm this. Its vital location is in the heart of the New Capital.

neighborhood, R7, on the central axis, specifically in front of the exhibition city.

In Addition, The seventh residential neighborhood is distinguished by being the least

dense neighborhood in the New Administrative Capital, and it is home to

the most important and largest real estate projects.

Available in Midtown Sky New Capital, other than villas, apartments, and commercial units.

The executing company of the Midtown Sky project, the new administrative capital, built it on an area of ​​122 acres.

In order to ensure the comfort of its customers, it has allocated a larger percentage in the project in order to spread the green areas in a large percentage within the compound.

The rest of the other spaces in the Midtown Sky Compound project were allocated to the establishment of projects, residential and commercial units, facilities and services

As for the spaces within the Midtown Sky Compound, the administrative capital, they are diverse, as the organizing company provides a group of residential units.

Between apartments and villas, as for the spaces of the apartments, they are as follows:

As well as the delivery of necessary and basic utilities that are indispensable in any project, as well as providing recreational services to make families happy.

Midtown Sky New Capital Compound
The most prominent services within the Midtown Sky Compound, the administrative capital, as follows:
The green spaces are widely spread within Midtown Sky, the new administrative capital, so that its residents can enjoy the most beautiful view.
Large artificial lakes permeate the green spaces in order to maintain calm, tranquility and stillness.
Swimming pools of different sizes spread throughout the compound.
Allocating a special entertainment area for children in order to make them happy.
Make special trails for walking, walking and cycling.
Gym as well as a health club.
Club House.
Establishment of fully secured parking garages.
Allocating a special area for restaurants and cafes.
Establishment of a large commercial mall.
Providing cameras with a security and guarding system at the highest level to secure Midtown Sky Compound.

Better Home Real Estate is one of the most successful real estate investment companies in Egypt.

Where this company was established in 1998 and has implemented many real estate investment projects in variouscities inside Egypt,

the most prominent of these projects are: