Solas mall new capital, it will be a commercial complex and is considered the most prominent location within the boundaries of the financial

It is designed in accordance

that take care of all the details

Which creates the right ambient atmosphere

for you to work,

and which encourages release.

it will be a commercial complex

and is considered the most prominent location

within the boundaries of the financial

, have a stunning natural view,

It was designed in a way that allows

the sun to enter it for natural lighting

and to save electricity

In addition, it provides many services,

all at prices that do not accept the competition.

in the most locations of

In the financial district in plot 2.25B.

The City of Culture and Arts.

Solas mall new capital will be next to

as it is the ministries buildings,

And the largest library in the Middle East

and the largest cinema complex.

The property remains within the financial district,

the most prominent investment space

It is the center of the Egyptian Monetary Bank

and the complex of Egyptian banks

International and all the main headquarters of banks:

Bank of the Arab Republic of Egypt

The mall overlooks a main path,

its width is one hundred m,

facing the presidential gardens at once.

the palaces and presidential buildings,

On the one hand and on the other side,

above a green garden area and a banking complex.

The project takes place on a 48 kilometer

distance from in East Cairo, Heliopolis.

It is 25 minutes from the town of New Cairo.

Solas mall new capital is half

an hour away from Suez Governorate.

It is half an hour away from Cairo International Airport.

and a quarter away from the center of Greater Cairo.

Solas Mall is located next to

It has a subway line – monorail – an internal tram

for the financial district, the ministries district,

All of these lines intersect at the central train station

of the New Administrative Capital.

next to the most prominent banks in the Administrative Capital,

Bank of the Arab Republic of

The plot is characterized by its huge space

that separates it from the neighboring buildings

Which achieves a high percentage of superiority

for more than 80% of the interior spaces,

It has natural light for most of the day

on the residents of the building

It supports moderation in energy consumption,

The capital is characterized by a new infrastructure,

and the administrative capital contains

and designated business districts for originators,

Solace Mall is one of the most prestigious malls located

in the heart of the financial

and business space in the New Capital.

Which is planned to become the headquarters

of the projects and the future

The Solace Mall is characterized

by the fact that it overlooks a similar open area

that is purified for prayer

Almost all offices with spaces between buildings

of up to eighty meters at left back.

a lot of distinctive workplaces

And a different set of natural fio in SOLAS.

You will find vibrant spaces and bright offices

Solas Mall will become the world

that seamlessly merge to create a U-style, SOLAS

Stand out in the new capital

with its artistic design

in addition to the spacious interior

In addition to strategies that give you serenity.

In addition to The construction rate is about 30%.

In addition to 248 garages.

The areas of administrative units

The property is composed of

The building combines many

In addition to The ascent of the continuous

In addition to The bottom of the corridor is

and the headquarters of institutions. 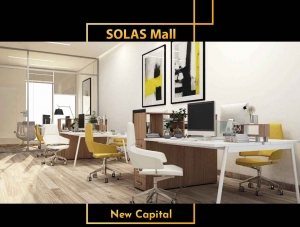 to provide you with psychological serenity

In addition to your work.

also on the ground floor.

In addition to there are well-equipped conference rooms

of the highest degree and standard.

It remains designated for waiting areas in all floors,

also remains within the scope of the SOLAS project.

with the highest standards of craftsmanship,

In addition to the presence of a large number

of recreational services within the SOLAS project.

with the latest equipment at the highest rate.

there are restaurants and cafes

In addition to Offer the most delicious western

In addition to there is a café on the roof,

and prayer areas are available.

There are also multi-use halls

of the highest degree and standard.

Within the project there are areas designated

for meditation and relaxation in the open winds.

In addition to the existence of business services

that include well-equipped business centers on a large scale.

There is also a garage below the ground for cars,

In addition to enough to accommodate 248 vehicles.

Security and guard personnel to defend

and secure the project for 24 hours.

, are among the highest.

This is if you compare it to all the unit prices

in other malls in the capital.

The prices of square meter

Floors from ground to 7 administrative.

In addition, Solace Mall has a very unique location

within the boundaries of the financial

the most prosperous parts of all centers

in addition to are located next to banks

That is why you will find

that the cost per square meter

for the units in Solas Mall is a huge possibility

for the start of your successful project.

Various payment systems, up to 8 years.

will be fully finished in April 2023.

In addition to finishes within the units

Bishop of Gibson Board.

It is the FAW Real Estate Investment

Which was established as a company specialized

in modernizing and marketing administrative

and commercial projects without others.

To become one of the first institutions

in the Arab Republic of Egypt in this field

And work to provide distinguished services

Reflect on the place of buying

and its investors and investors

The President of the Foundation is

in Sudan and Deputy Director

of the Country Medal of the First Class.

As he worked as a civilian as Deputy Director

of the National Center

for Planning Land Uses of the Republic

He is also the managing director of

And the Holding Corporation for Maritime

The structure of FAW institutions for investment

The Foundation Board consists of directors

and founders of three institutions in different fields

It has been working in the Egyptian buying

and selling place since 1989 as follows:

First Sport was established in 1989

as a specialist in the supply

of equipment for sports fields

And the representation of

international institutions from the factory

of the most optimal forms of artificial grass

and has undertaken a lot of unique projects such as

in the field of data technology

with the Arab Authority

The pioneer in importing

in addition to the finest technologies

and implemented projects such as

That is why you are dealing

with one of the largest institutions

the satisfaction of our customers

And it provides everything

that contributes to the success of

your project from a distinguished site

and you have carried it exclusively,

An elegant design that suits you.

In addition to there is Solas mall new capital.