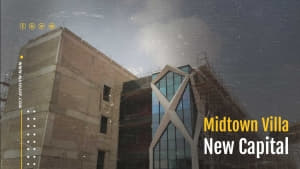 new Capital or New Administrative Capital Midtown Villa, is one of

Better Home Real Estate Development Company’s projects, which will be explained below:

Starting from 265 + 100 square meters, with special prices, starting from

There are shops on the first floor, with spaces starting from 120 square

meters, with prices starting from 5 million and 400 thousand pounds.

There are commercial stores available on the second floor, with space

Taking into account that those prices were suggested by the company

developing the project, with special facilities in payment.

Suitable for all financial portfolios and simple down payment facilities.

The down payment of Midtown Mall, the New Capital, starts from 10%,

and the installment period is up to 5 years.

The Midtown Villa New Capital project is located in the R7 region,

directly in front of the Cathedral.

The Midtown Mall, the New Capital, is located on two main axes in the capital,

which are the central axis and the inner ring axis.

Al Masah Hotel, the government district, ministries and the British

University, It is located across from the fairgrounds.

It is located near the ring road.

Better Home was founded in 1998, which includes three companies in

Where Better Home has implemented a number of projects within

Sixth of October City and Minya.

Of Better Home residential projects in the New Administrative Capital:

It established the Midtown Condo project, the new administrative capital.

The Midtown Mall established a villa in the administrative capital.

Which is one of the first new residential projects, which offers

a distinctive set of integrated services and facilities,

villas inside Midtown Villas, as they are as follows:

The prices of the Twin House units start from 6 million and 260 thousand pounds.

With the assurance that Better Home provided these prices with easy

a 10% downpayment and installment period of up to 6 years.

From the above, it is clear that Midtown Villa was built in the most important

and prominent locations within an area with integrated services and facilities,

with the latest high-end designs.

suitable for all current and new individuals.