Hoping to have a strong imprint

in the Egyptian real estate market

All this by creating a completely different

The Green Avenue compound will be located

There is a Green Avenue project

next to a plot of land designated

for an international university.

It is located in the seventh

It is next to the eighth residential district,

It is considered the latest project

Green Avenue is located near the Green River,

the Grand Mosque and the Cathedral

It is located next to the Opera House,

and the Government District.

It is also only a few minutes away

from the Presidential Palace

and the New Capital Airport

It will be the most prestigious diplomatic area

next to British universities.

For those important places,

Once you get a unit

in the upscale Green Avenue complex,

You will be fired in a few minutes.

on the latest sophisticated modern design.

Overcrowding in the complex

was allocated for construction.

in the new administrative capital consists of 17 buildings

A total of 490 apartments in the entire project.

Of course, this is a very small number compared

to the space allocated to the project,

Its purpose is to provide as much space

as possible for green spaces,

Approximately 79% of the total area

of ​​the project is allocated to green spaces,

streets and other services.

The apartment area is available

I know that the units of

between regular apartments and penthouses.

You can also find real-time delivery villas in the capital

Among the villas for sale

in the destination complex.

There are large green spaces in the building

Which allows the unit to

enjoy the most beautiful view.

Running and cycling tracks are available.

There is a banquet area,

in a balanced manner.

There is a service area with shops,

areas for children and dancing fountains.

There are theaters and cinemas.

some suitable for children

and some suitable for women.

For more luxury and entertainment,

There is also a courtyard where talents,

graffiti, and other arts are displayed.

The camera monitors the nursery

and the private underground garage

There is a medical clinic,

the main kitchen serving the compound.

in addition to electronic gates.

because it is the cheapest in the new capital

Compared to the excellent services

provided by the compound.

in the shape and quality to your liking

as per your preference,

There is a semi-finishing system

and a very special quotation for the third stage,

The price ranges from 9000 pounds

The third phase of the project is being started,

and the unit is ready to move into it.

The conditioning has been completed.

To meet the needs of all customers:

and installments for 7 years.

There is 10% down payment

and installments over 8 years.

The remainder shall be more than 9 years.

There are spaces in the Compound Green Avenue New Capital

For these units, the down payment is 10%,

5% is paid upon receipt,

and the rest of the unit price is paid

in installments within 7 years.

There is another payment system

that pays 15% in advance first,

Then 10% is paid after receipt,

then the rest of the unit price is paid within 8 years.

The payment system for these units is as follows:

The rest of the unit price is

to be paid in installments over 7 years.

There is another payment system

for these spaces which is 10% down payment,

You have confirmed to us

On hand and an excellent investment opportunity.

Especially since the deal will take place

with a reputable company

in the real estate sector,

It has applied its experience gained

from the global market in Egypt.

is the Green Avenue

And the previous works are very reassuring

features for any client

who wants to invest in the property,

The company that owns the property is a large

This is what Green Avenue,

the elegant New Capital offers you.

Especially since the company

that owns the Green Avenue project in the new capital

It is a New Jersey real estate development company.

in the United States for the past ten years.

Including commercial and medical centers,

In addition to its tourism project,

The project is also distributed

However, I decided that in addition to Green Avenue

which was built in European

It also decided to occupy the new capital

to move all the advantages

of the apartment abroad,

But it was in keeping with our customs

and the price was reasonable.

By creating a distinct project,

such as a carefully selected upscale green street,

And provide all basic

and the project consultant, Engineer Samir. 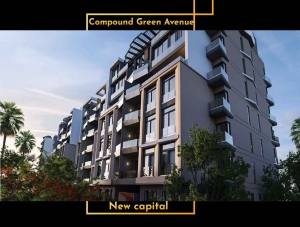 The most famous of them is the government district,

Also, It can also overlook many main roads,

In addition to integrated services,

In addition to the government, district is the most prominent

In addition to there is Compound Green Avenue New Capital .