Anakaji compound new capital is inspired by the pristine, easy with Excellent location and the latest launches of Aqar Misr

the preservation of the revival of

of the Arab Republic of Egypt

Through its popular projects

throughout the Arab Republic of Egypt,

From Upper Egypt to the Egyptian capital, Cairo,

and the northern coast,

To the new administrative capital,

with its latest launch, the upscale Anakaji New Capital Compound.

The word Anakaji means my home,

as it is a project that brings warmth

and vitality to New Administrative Capital.

With so much fun, simplicity and uniqueness.

in the unique Nubian architecture

Its cheerful colors blend between the colors

of nature and the colors of wood.

You will find it within Anakaji compound new capital,

but with a modern touch.

in twenty acres of scenic similarities,

And the magic of Nuba falls in its details.

in one of the best locations in the capital,

Which has been carefully selected,

to be the closest to the various key areas.

in the 8th residential district, R8, plot i4.

near the diplomatic district,

The most prestigious neighborhoods of

where embassies are located.

an immediate view of the Green River,

Which is considered the largest central park

in the world and extends from the beginning

of the Administrative Capital to its end.

And the matter does not stop there,

when the dialogue is about the features of

It is located opposite Anakaji compound new capital,

Which includes the headquarters of ministries,

and the original bodies.

Also close to the Presidential Palace,

the Opera House, the meeting room,

and the famous Al Masa Hotel.

Then you have to choose

You will be adjacent to

the most important neighborhoods

and landmarks in New Administrative Capital.

All services are available

with all the meaning of the talk.

It is located within the compound,

only ten clusters of buildings,

As the total number of project units,

on the area of ​​twenty acres.

The Anakaji project will be established in 3 periods;

Therefore, it is considered one of the smallest

and most abundant compounds

The construction rate is only

This is to make room for

the first percentage of the location of

Anakaji put the building of the Arab Republic

of Egypt in it, all the expertise

of the engineering brains,

And extending for more than 25 years,

and on top of it is the great consultant Majid Major.

in which cultural heritage mingles

with modernity in harmony

and no better than this. 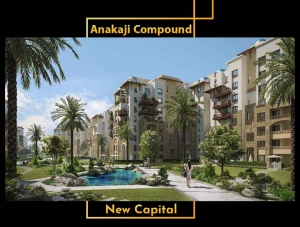 The areas of the residential units in Anakaji:

Anakaji new capital is a compound of

And penthouses of different sizes,

for you to choose from them what suits you.

Knowing that throughout the first round,

322 housing units will be offered only.

and only 3 units, in different floors.

on a main street whose width is eighty meters,

and the other street is close to sixty meters.

The width of the Anakaji project is 160 meters

and the length of the project is six hundred meters.

The compound has two entrances at the beginning

also end of the project, so to avoid crowding,

in addition to investor comfort, with security

also guard services on all the time.

there are green spaces,

It has a different group of the most luxurious stores

that provide you with the most prominent

Just as there is a clubhouse for children

and another for adults to give you

the highest levels of luxury,

all services are available.

An integrated library and cultural center.

There is a bakery in the Anakaji new capital.

A space for restaurants and cafes

on an international level of hotel services.

And a common laundromat.

You will also find a place dedicated to celebrations

in the famous Nubian style.

Also, there is a large number

of international schools nearby,

are considered one of the best costs in the capital,

Especially with so many services,

And good taste in the settings

that will transport you in the heart

of the charming country of Nubia,

The country of brown faces and white hearts.

prices vary according to the finishing style of the units.

The value of the apartment starts

Delivery will be within 3.5 years of contracting.

As the Arab Republic of Egypt Real Estate Building Corporation,

through Anakaji Compound, grants you the best prices,

Which brings you a successful investment possibility,

to suit your different needs.

The payment method remains 5% in advance,

and the rest in equal installments over 9 years.

10% down payment, and the rest

in equal scheduled payments over 8 years.

Or spend twenty percent in advance,

in addition to then ten percent until now a year,

Then ten percent until now in the second year,

also then ten percent as a delivery payment.

then a 10% delivery payment,

and the rest over 12 years,

25% down payment, then 5% receiving payment,

and the rest over 12 years,

Knowing that the date for

available for a small amount,

so you won’t find better rates than

and its unique facilities.

The project of the new building of

the Arab Republic of Egypt is a project

that combines simplicity and sophistication,

Inside it, you feel heritage

and grandeur enveloped in modernity

in addition to urbanization.

is a new upstream institution.

However, she managed to stand out very quickly

And it confirms its rank among the adults

in the place of buying

The structure of the shareholders of

for Urban Development consists of:

From a group of investors in the construction

And on top of them, Engineer Majid Major,

Chairman of the Foundation’s Board of Interest.

During the past years,

it stood on its feet with several highly

It was also the most prominent role

Establishment of 30% of the towers in Assiut.

And the construction of buildings in the assembly

and the new Arab Republic of Egypt.

and landscapes for the Mivida project

And the construction of 23 buildings

in the Stone Residence compound

Until it issued a decision directing

its economic compass to one of

Therefore, in its latest projects,

Which brings you an expensive piece

of the charming Aswan between your hands,

Which was promoted by using the project strategy

of the massive engineering office DMA.

It is the same office that stood on

and The Loft New Capital project as well.

Those responsible for designing

and establishing Anakaji Compound promise you a calm

and modest atmosphere amidst

the green nature that relaxes the nerves.

With the availability of various recreational services

and skilled infrastructure around you.

In addition to there is Anakaji compound new capital.