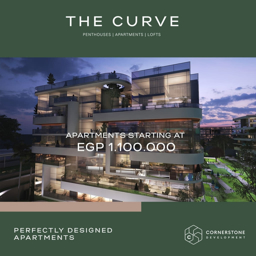 The Curve new Capital project was launched by the Corner Real Estate Development Company, for

Engineer Ashraf Boulos, Chairman of the Board of Directors

and attract the largest segment of investors.

Corner Stone has chosen the location of the new administrative capital to set up its first projects, realizing

the importance of the capital, and the state aims to create an urban society with the latest methods

and with the strongest infrastructure,

compete with many international cities with their plans and infrastructure.

Contents
1The Curve new Capital Compound location:
1.1Payment systems in The Curve new Capita project:
1.2Information about Corner Stone Real Estate Development, the founder of The Curve, the New Capital:
2The Administrative Capital adopts the ministerial decision for The
3Curve, the administrative capital, owned by the Cornerstone
4company:
4.1For reservations
4.1.1You can inquire and communicate by calling
4.1.2Or via WhatsApp

Paul stressed that the company’s first project, The Curve, is located in a unique location in the New

Administrative Capital in the R8 region, directly in front of the Green River.

And near the axis of Mohammed bin Zayed, the airport, the Republican Palace and ministries.

Boulos confirmed that the construction rate of the project is 18%, which is less than the permissible

22.5%, and the project contains services:

the project, with a ceiling height of 6 meters.

The areas of the units range from ninety to three hundred meters, with seventy% of the areas between

ninety and 180 meters, to suit the largest segment of the investors,

The designs assigned to the project will be through the largest consulting offices in New York, America,

and the project contains commercial, administrative, cultural and sports services.

Engineer Ashraf Boulos has provided different payment systems between 5 to 6 and 7 years, and the

company is committed to handing over its units to investors according to specifications,

Delivery dates will start in mid-2023, as well as creating a homogenous customer base.

Information about Corner Stone Real Estate Development, the founder of The Curve, the New Capital:

leading real estate companies in Egypt in the next few years.

Paul confirmed that the capital of the Corner Stone Company is six hundred million pounds.

construction measures, as well as adherence to delivery schedules.

The Administrative Capital adopts the ministerial decision for The

Curve, the administrative capital, owned by the Cornerstone

Curve integrated residential project, with Ashraf Boulos becoming the president of the Cornerstone

Corporation, which owns the project.

He pointed out that the company plans to establish other projects in several cities, with integrated

residential and coastal activities, and the company places the cities of Ain Sokhna and New Alamein at

the top of its concerns.

The company has a great intention to expand by relying on its various portfolio, and it pushes it to start

is trying to establish