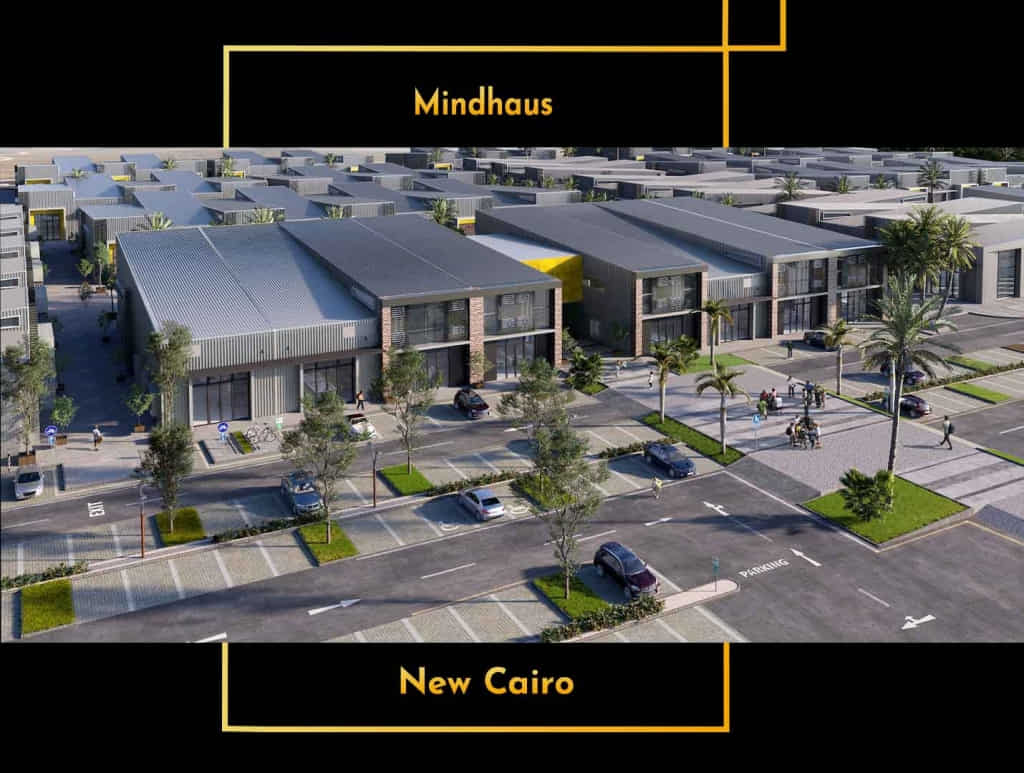 A place where differences meet and greatness occurs. minds that make change happen.

For strong minds who succeed often. minds that are always getting better.

For creative minds who notice greatness. Secure for the enthusiastic minds that emerge.

District 5 Mindhaus brings you; A new community of office space.

For well-established mid-sized organizations looking to elevate their premises into stand-alone locations that reflect their identities as well as their personality,

Mindhaus Strip offers a variety of office styles in a G+3 format. Spread over 16 acres,

this multi-phase office complex contains a series of office buildings The boutique,

overlooks the residential component in District 5 in addition to its commercial area,

which includes Kattameya Mall, and also the lifestyle center,

and also the sports complex. So is the Mindhouse Campus.

District 5 is in an average area between New Cairo and Nasr City,

where it is only 6 minutes away from Key Heights Compound,

only 7 minutes away from the 90th Street,

only 8 minutes away from the new American University headquarters,

and only 13 minutes away from the heart of the neighborhood Maadi, and only about 45 minutes from Cairo International Airport,

and only 45 minutes from Ain Sukhna.

a strategic location in District 5 was chosen with consideration for excellence as well as comfort.

Among the planned southern extension on an area of ​​about 13,000 acres for New Cairo,

Zone 5 will be in the center of New Katameya.

It is located on the Cairo-Al Ain Sokhna highway,

and it is connected to District 5 with the Red Sea.

Very close to home, the Wadi Degla Reserve sits on the southern edge of the development,

giving you very easy access to the scenic outdoors whenever you need a quick break from the city.

A variety of office styles are available in G + 3 format. This multi-phase office complex is spread over an area of ​​16 acres, and contains a series of boutique office buildings starting from 600 to 2,400 square meters.

Mindhouse New Cairo prices are among the lowest residential prices in the real estate field in New Cairo, compared to many services and facilities available within the compound, which provide a wide range of entertainment and also amenities for the residents of the compound so that customers enjoy the greatest amount of healthy life, comfort and luxury.

One of the largest real estate companies that have contributed to

the construction of many residential and commercial projects inside and outside Egypt,

and it is the real estate investment arm of the “Fawaz Al Hokair” group of companies in Egypt,

that group that was established inside the territory of the Kingdom of Saudi Arabia,

specifically in Riyadh in 1990, which She has an insignificant previous work in

the Egyptian Real Estate newspaper, including:

the Egyptian real estate market with its first production “Mall of Arabia” in December 2010 in Cairo,

which achieved great success which the company touched since

the beginning of its planning.

In September 2015, the company organized a distinguished work team,

consisting of the most skilled and also the most efficient professionals as well as engineers,

as well as Egyptian architects,

and authorized them to develop and manage its Egyptian projects.

It proved its worth in the Egyptian real estate market in a very short time,

and then it started developing a second phase of “Mall of Arabia”,

as well as continuing to build other commercial centers.

It defined its vision and decided to become a pioneer in three sectors,

the first of which is the glamorous residential complexes with international styles,

the second of which is the commercial malls equipped with the latest modern technologies,

and the third of which is restaurants, as well as cafes,

as well as high-end entertainment centers.

It dazzled the world with its construction of

the “District 5 Compound” project in the Fifth Settlement in the heart of New Cairo.

In its projects, it is concerned with the application of modern technology as well as smart and

modern technologies at the highest levels of sophistication and

elegance in a way that ensures customers

the highest luxury and also enjoyment to the fullest extent.

The best management systems for buildings by providing them with “audio and visual intercom”,

as well as television screens, as well as central Internet networks,

as well as access cards with “RFID” technology in order to ensure an exclusive and special way of life for customers.

In its projects, it was keen to be equipped with protection systems,

as well as security, including security and guarding,

as well as surveillance cameras, as well as fire alarms.

the Gulf countries in order to encourage investors to start their investment in New Cairo.

Its keenness to present its projects at competitive prices that allows investors to acquire luxury units at a lower price.

Note that the prices as well as the spaces mentioned in the article are for the first half of 2019, and therefore they are subject to change, and we are keen to update them constantly in order for the customer to be aware of the changes in the real estate market.

The Fifth Settlement area is one of the finest new cities, and the area contains all the services you need,

and there are many international companies’ headquarters.

It is located near Nasr City, Carrefour, Maadi and the Ring Road.

It includes the most prestigious compounds,

as well as residential neighborhoods that provide all services and facilities,

It contains both governmental and specialized hospitals,

as well as international institutions, including the National Bank, Bank Audi, Al Ahli Bank of Qatar,

The most luxurious mosques, such as: Al-Farouq Mosque,

What are the finest neighborhoods of the Fifth Settlement?

It includes many services such as banks, as well as schools,

as well as shopping centers and many international companies,

and important services and facilities.

The most prestigious neighborhoods in the Fifth Settlement include: The American University,

It is close to the new cities, namely Al-Shorouk City and Madinaty. It also includes many services such as administrative buildings, hotels, the Future University,

One of the best neighborhoods, as it contains: villas,

as well as schools and hospitals.

The finest neighborhoods of the Fifth Settlement,

where it is located at the entrance to the settlement,

and contains many services and schools.

It is also located at the entrance to the Fifth Settlement,

and contains many services such as private institutes, sports clubs, parks,

It is located very close to the 90th Street,

and contains many services such as: the German University,

as well as American schools, as well as the Future Mall,

and the Egyptian Language Schools.

It contains many compounds such as Heights Compound,

as well as New Cairo Club, and Cairo Bank Club.

It contains the Tigris flute and also the Platinum Club.