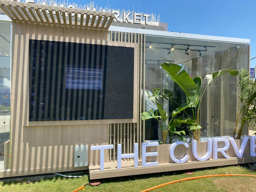 Curve Corner Stone project is considered the most privileged location in Cairo, as the search for an

upscale residential complex should give its children a bright future.

Its features are evident in the heart of a headquarters that makes the future in person, draws steps for

tomorrow with his ideas, and defines the contours of the world during the coming years,

That is why you have to go to The Curve, the New Capital, to own one of the best

and most luxurious residential units in Cairo.

It has all the services in the heart of the New Capital, to enjoy the best prices for

residential units in The Curve and payment systems.

Prices of residential units in The Curve Corner Stone Compound:

The details of The Curve Compound were distributed into four areas connected to each other, by

You think that the prices of the residential units in The Curve are unrealistic, just as your imagination

was set for you that such services are not available in Cairo.

However, in fact, the prices of the residential units in The Curve are quite suitable for such a category of

The units “flexi finish” were not completely finished, ie 75% complete.

unit according to what he loves and wants, whether from the colors of the walls, the shapes of raw

materials or the division of lighting.

5% discount without downpayment and installments for five years.

There is a second model

Installments for a period of seven years so far, 5% downpayment, and after three months, 5%

Then the fourth installment will be paid after two years, ten% and the rest are equal installments.

Inside the intersection of two main streets, an area of ​​sixty meters each,

A vital location was chosen for the establishment of the Curve Compound, near many service areas, as a

As the most characteristic of the location of The Curve, the capital, is the direct view of the Green River

and enjoying the most beautiful, comfortable and pleasant views.

Also, within the compound, you will find a large number of service areas that facilitate life in The Curve,

such as centers, parks, libraries, hotels and restaurants.

In addition to that, the diplomatic quarter, which is close to the compound, the government district, the

fairground, and the cathedral.

And when we talk about the necessity of any residential location , it must be near the various and

branching methods to the largest possible number of areas, and then facilitate movement to that

km, And it is close to the Central Ring Road, 25 km away. Prices of residential units in The Curve

Services and features in the Curve Corner Stone project:

Which of its role is to provide the highest amount of luxury to all people, and to

provide a quiet life that gives each person a huge advantage.

And each property is in the most appropriate location for it, where the finest view extending from green

About 82% of the total area of ​​the compound, which is estimated at 13 acres, has been allocated for a

very ingenious design of the landscape.

As for the rest of the place, which is less than 1/4 of the location of the compound,

it is intended for apartments of all kinds.

entertainment and pleasure, so you get out of your life from the tedious routine and the effort and

responsibilities for sleep and rest.

There is a diversity of activities that encourages you to transform your life system, so that the

entertainment space takes a part of your time and your day like other life obligations.

In the following lines, we will take a look at all entertainment services in the Capital’s Curve.

The services surrounding you in the Curve Corner Stone project

The areas of the Curve Corner Stone project:

The Cornerstone Company implemented the last architectural appearance in The Curve, to make the

compound on a high scale of sophistication and luxury.

The best engineering consultant in Cairo was hired, the engineer Yasser Beltagy, who is well known, and

unique with his beautiful designs.

All units are planned with a huge terrace, so you do not enjoy watching the green river in the open

Many units distributed over 8 floors, including the ground floor, have been saved in 15 residential

There are residential units.

In Compomed The Curve, you will find the little-known type of loft units, which have the highest luxury

You can find it on the 6th and 7th floors, and each unit has its own garden and swimming pool.

On the ground floor, there are duplexes with their own garden, with variants starting from 280 square

The designs of the residential units in the Curve Corner Stone project:

The residential units in the compound have four designs as follows, and their space starts from 76

There are one bedroom units.

There are three bedroom units.

There are four-bedroom units available.

In all properties within the compound, you find the Tree Lounge space in one of the first four floors, for

you to enjoy the most enjoyable and happiest periods

Whether it’s reading books, having fun meeting up with your friends, or drinking your favorite coffee,

Also, in the buildings of the Curve, you can find a ground floor lounge, on the ground floors, that suits

The project name is The Curve Compound

Location The new administrative capital in the 8th residential district

The place of buildings is 18% of the total area

The number of buildings is 15 residential properties in the compound

Egyptian market during the coming period.

This is by establishing a number of projects in urban and coastal cities.

The management of Conner Stone Company was well aware that the opening was in the New Capital,

and this became its approach to its upcoming projects, so The Curve project was a perfect example of

The company advanced that size by owning a capital of about six hundred million Egyptian pounds, in

addition to the great experience of more than thirty years of its owner, Engineer Ashraf Boulos.

You find the company’s position in the Egyptian market stemming from its unique designs,

She is fully keen on everything that has been agreed above with every customer, even if the details are accurate.