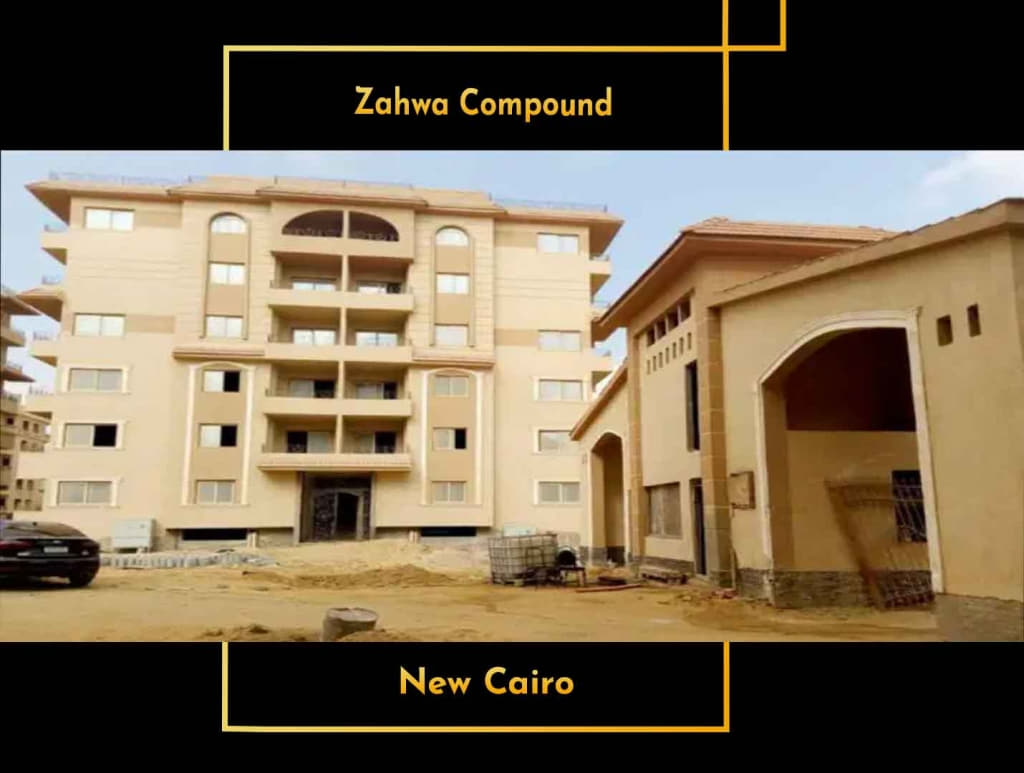 Zahwa Compound New Cairo It is located in the southern investors area in the Fifth Settlement, which is an area that are all compounds only.

the heart of New Cairo, and its large area has been divided between gardens,

Al-Zahwa project is located in the southern investors area in the Fifth Settlement,

which is an area that is all compounds only, bordered to the north by

the North 90th Street and also the Future University,

and to the south by the extension of investors as well as the Sphinx area, and to the east by the American University and Construction Bank,

and to the west by the Narges area and also intelligence lands .

with a 20% down payment and the rest in installments over 5 years.

Al Zahwa Compound is located in the southern investors area, and is characterized by its strategic location,

as the Al Zahwa compound is located on the most important axes and also the main roads,

including the Ring Road and the Middle Road,

allowing you to move to all the surrounding new cities such as Al Shorouk,

Obour, Badr and the Administrative Capital, in addition to the areas of Cairo and its suburbs. .

The project is bordered by the North 90th Street and the Future University,

from the south by the extension of the investors and the Sphinx area,

to the east by the American University and Construction Bank,

and to the west by the Narcissus area and intelligence lands.

Al-Manara Cooperative Housing Association has provided different spaces for the housing units in order to suit the diverse needs of customers.

The prices of Al-Zahwa Compound New Cairo are among the lowest residential prices in the real estate field in the New Cairo area compared to many services and also the facilities available within the compound, which provide a wide range of entertainment and also amenities for the residents of the compound so that the clients enjoy the greatest amount of health and comfort as well as luxury.

The association responsible for the Al-Zahwa project in the Fifth Settlement provided; Al-Manara Housing Association, all of its clients have payment systems with huge payment facilities in order to allow the possibility of owning a private unit in an integrated housing project without incurring any financial burdens.

The company that owns the Zahwa Compound New Cairo :

Al-Manara Cooperative Housing Association is the developer of the Al-Zahwa project in the Fifth Settlement, and it is a leading association in the field of real estate development, and it has previous real estate projects in Egypt in several cities as well as Egyptian governorates.

The company’s business varies between residential and tourist projects, including:

Note that the prices as well as the spaces mentioned in the article are for the first half of 2020, and therefore are subject to change, and we are keen to update them constantly in order for the customer to be aware of the changes in the real estate market.

Your successful investment in New Cairo:

New Cairo represents the best place for real estate investment in Cairo, as it contains many massive real estate, commercial centers and luxury residential complexes, as it can be considered one of the most worthy areas that offer real estate for sale at the best costs in New Cairo, and the Arab Republic of Egypt is still witnessing a large urban movement during the period The last, New Cairo is known for its various neighborhoods and services, the most important of which is the famous 5th Settlement neighborhood, which combines a number of the most luxurious and finest residential buildings, in addition to being one of the best neighborhoods in Cairo, the modern capital of Egypt.

New Cairo is a full-service community

is a vibrant city, as it contains large quantities of commercial malls, the most important of which are Cairo Festival City Mall, Point Ninety Mall and Downtown, as well as a large number of restaurants, cafes and major hotels such as the JW Marriott Hotel and Kempinski Hotel and others. In New Cairo, you find many types of Educational services such as the American University, the German University and the University of the Future, and prestigious schools such as Choueifat School, the Canadian International School and Malvern School, in addition to health services such as the Al-Jawy Specialized Clinic, Al-Shifa Hospital, Tabarak Hospital, and others. Certainly, it contains with it a large number of various compounds and residential complexes inhabited by thousands of families each. These are a great crowd for your business of any kind.

Advantages of living in New Cairo

New Cairo has become one of the most important high-end cities compared to the rest of the Greater Cairo cities, and a very important destination for those who wish to live in high-end and distinguished housing, as well as those wishing to invest in real estate, for several advantages, the most important of which is the quality of urban planning and also the widening of the main streets, which reduces congestion, and that is the low density The population, as well as the distance from slums and those popular housing as well as overcrowded areas.

New Cairo includes many major universities as well as private and international schools,

which help your children in all their educational stages so

that they do not find daily difficulty in moving to other cities to study,

and among those universities: the American University,

as well as the British University, also the University of the Future, and the Canadian University.

And also from private or international schools: Akhenaten School,

the International School of Choueifat, as well as the American School and others.

It provides all health services from specialized medical centers,

as well as major pharmacies, as well as private hospitals such as: Al-Jawy Specialized Hospital,

Your children can play their favorite sports such as: swimming, football, basketball,

tennis, karate, or any other sport. In major sports clubs such as: Al-Zohour Club,

The northern or southern 90th Street includes all integrated services from commercial markets and malls,

as well as entertainment centers for adults and children, restaurants,

as well as cafes, and all major institutions and local and international banks.

also a great rush of citizens as well as investors.