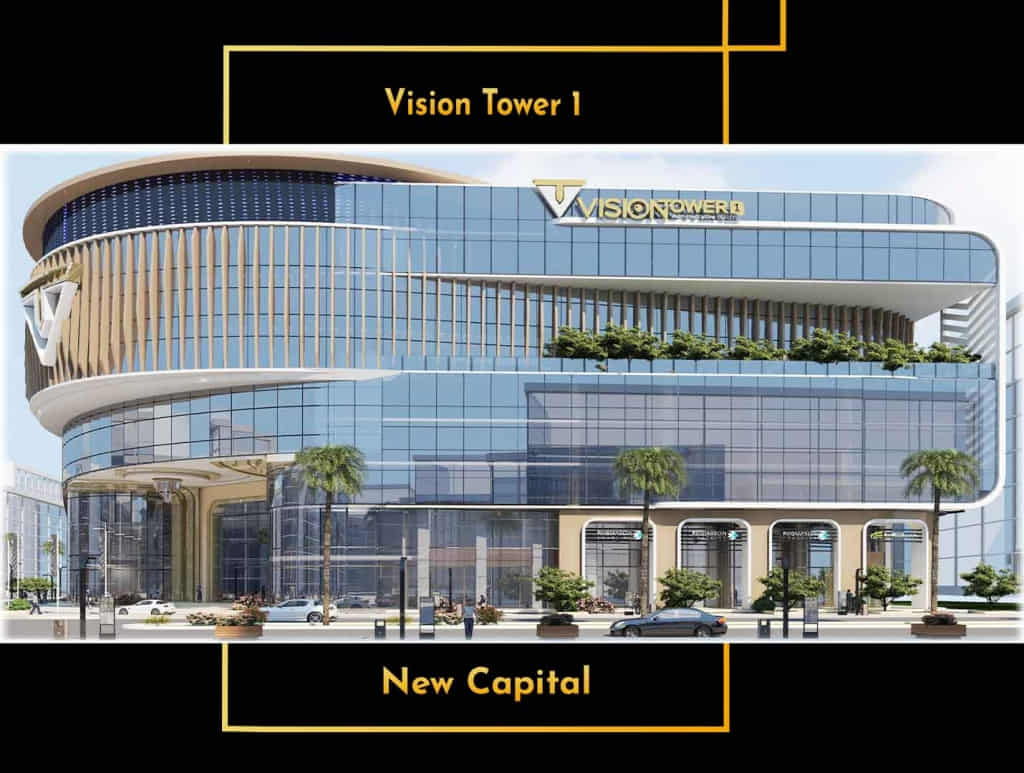 one of the highest and largest towers in the heart of the New Capital,

with a very strategic location.

one of the highest and largest towers in the heart of the New Capital,

with a very strategic location,

everything in VISION TOWER 1 NEW CAPITAL makes it a unique investment opportunity for those looking for a distinctive way to invest Money and a very special place to work,

far from sources of noise and at the same time being in the heart of the event in a vital area that ensures the activity and popularity of projects.

It contains different administrative units only.

It is one of the most important works of the Delta Real Estate Investment Company.

Vision Tower 1 New Capital will be implemented within the central business district,

on the opposite side of the district Overcrowded towers,

the heart of the Central Business District (CBD),

this wonderful location is characterized by a number of characteristics, the most important of which are the following:

Comprehensive services are among the most important advantages of the project, which attract more investors as well as customers. The most prominent of these services are the following:

The tower built on a huge area, and its height is about 44,000 meters.

It consists of a ground floor of 8 floors, in addition to 4 underground garages.

Delta Real Estate was keen to provide all units within

the project at competitive prices that suit all customers of various categories,

as the square meter price is one of the best prices in the New Administrative Capital,

The company provided great facilities for customers as well as easy payment systems in return for owning a unit within the Vision Tower 1 New Capital project,

and this is represented by paying a reservation advance and a simple contract,

the longest repayment period of up to 12 full years.

the field of urban development as well as project planning and management.

Note that the prices and spaces mentioned in the article are for the first half of 2021, and therefore they are subject to change, and we are keen to update them constantly in order for the customer to be aware of the changes in the real estate market.

The most important landmarks of the new administrative capital

The new capital contains a number of globally important landmarks,

which expected to be a strong destination and stimulant for global as well as local tourism, whether for recreational, educational, health or service purposes:

Al-Fattah Al-Alim Mosque: a giant religious edifice and is considered one of

the largest mosques in terms of area in the world. It built on 106 acres with impressive architectural designs. The mosque topped with 21 domes and 4 minarets.

The Cathedral of the Nativity of Christ: It implemented on an area of ​​about 7,500 square meters,

which means that it is the largest cathedral in the Middle East,

and it contains a reception hall as well as meetings, in addition to the papal headquarters building.

The Canadian University: The first foreign university to be built on the land of Egypt.

Its establishment was started by a republican decision.

It implemented on an area of ​​about 30 acres, and includes the University of Prince Edward Island.

Governmental District: It is the area designated for institutions and facilities as well as government headquarters. It contains about 18 ministerial headquarters,

Integrated service cities: Among the most prestigious landmarks on the map of

the new administrative capital are the exhibition city, the conference center,

Residential Neighborhoods: The New Administrative Capital’s compounds are considered one of

the most prestigious landmarks on the map of the New Administrative Capital,

because of the New Administrative Capital’s residential projects in general of unprecedented sophistication and luxury at the level of construction and architecture in Egypt,

and it considered the finest in the seventh residential neighborhood,

the largest central park in terms of area in the world,

in addition to 20 residential and commercial towers that provide integrated units with services.

International Airport in the New Capital: The airport built on a very large area, estimated at 16 km.

Services of the new capital

One of the best services in the new capital for its residents and is an important destination for visitors from all Arab and also foreign countries is the Central Park,

which is the largest in the world, where an area estimated at more than a thousand acres,

equal to the area of ​​the central park in New York State,

allocated. Twice, the first phase of it,

which amounts to about 7 acres, has already completed.

The Green River, which is one of the largest green axes in the world,

passes through the central park in

projects of the new administrative capital established in

the capital’s neighborhoods in a wonderfully civilized image that simulates the Nile River in Cairo.

The area in which the central park is located and also

the Green River contains a number of parks and

gardens as well as recreational areas that guarantee visitors entry and

also recreation as well as enjoying their time free of charge.

the most advanced security control and control center in the world,

by providing the various areas of

the capital with more than 6,000 surveillance cameras operating with the latest security systems.

the various governorates of the Republic through stations and railways of

the highest international level at the present time,

including an electric train that connects the new capital to some areas very close to Cairo, such as the 10th of Ramadan City and also Belbeis.

The new capital also contains a bouquet of commercial malls that provide all products as well as international brands as well as goods and is a destination for shopping enthusiasts and the acquisition of high quality.

in addition to a club house, as well as a spa,

as well as massage centers and gymnasiums.