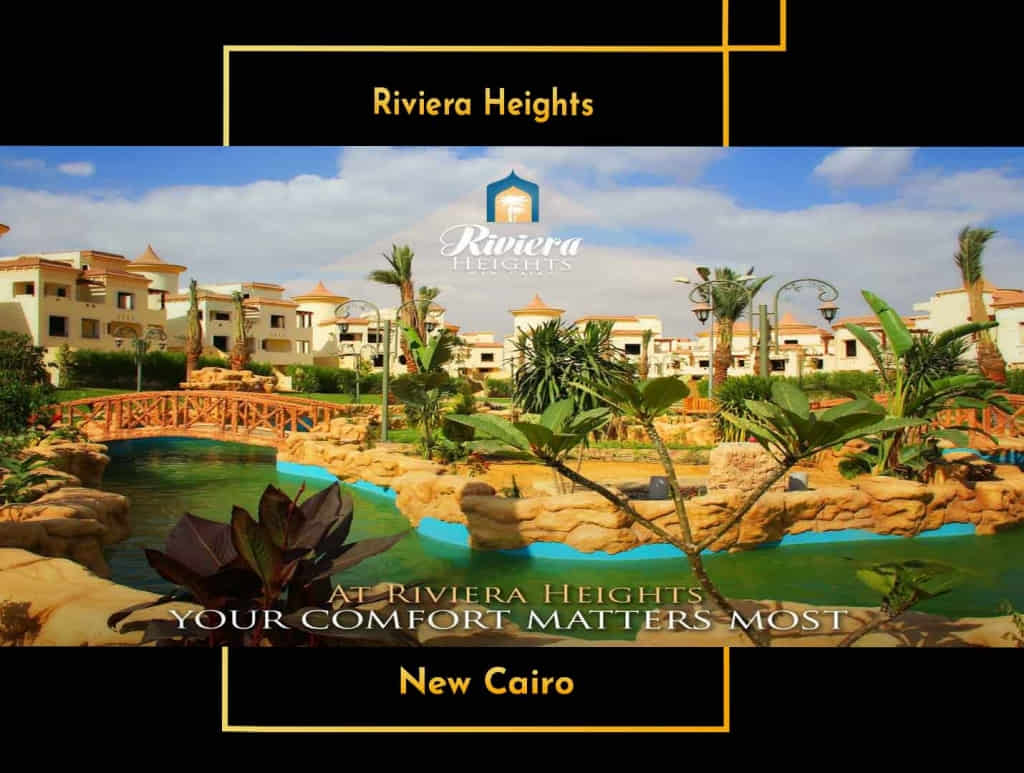 Riviera Heights Compound New Cairo The compound was built on an area of about 24 acres,

and the company was keen to make 80% of the total percentage for green spaces as well as landscaping.

With self-financing and complete independence from Nova Stanza Real Estate,

Riviera Heights Compound was established on an area of ​​about 24 acres,

in the most prestigious neighborhoods of New Cairo,

for more luxury and finding all services in one place.

The compound was built on an area of ​​about 24 acres, and the company was keen to make 80% of

the total percentage for green spaces as well as landscaping,

and 20% for buildings as well as facilities, and took care of choosing the site carefully,

in order to be close to schools and also Hospitals as well as entertainment venues and also shopping centers,

so that individuals can get all services and also supplies within a very short time.

Features of housing in the Riviera Heights complex

The project is characterized by its strategic location, which is located in the heart of New Cairo,

within its best neighborhoods in the Fifth Settlement.

It is also characterized by its close proximity to the 90th Street,

which is considered one of the most famous neighborhoods of the assembly,

as it contains many major service institutions as well as recreational places.

The project enjoys an infinite set of services, the content of which varies between residential, administrative, recreational and so on, all provided at a high level of creativity and also excellence, and the most famous of these services are the following:

The project is a residential complex that includes all types of villas,

and its number is about 97 villas, varying in sizes,

to suit the diverse needs of customers.

The company offered a different set of prices, due to the different spaces.

The prices of the units offered for sale considered appropriate to

the extent that they are compatible with the finishes they contain and the services they enjoy.

Customers can follow the following system when resorting to installments, as follows:

About the real estate developer of the Riviera Heights project

This great business belongs to one of the best Egyptian companies in the field of real estate,

Nova Stanza, which established in 1986, and since that time;

It seeks to establish projects with a classic Western as well as Arabic character,

and to manage them with the latest technological means,

through the use of the best experts as well as engineers in various fields.

Over the course of 30 years, the company has been able to record its diverse business among the list of strong projects, which have been very popular with customers, as well as Arab and foreign investors, and among these works:

Note that the prices as well as the spaces mentioned in the article are for the first half of 2019, and are therefore subject to change, and we at Masharef are keen to update them constantly in order for the customer to be aware of the changes in the real estate market.

Landmarks you can find in the Fifth Settlement

The assembly considered the most famous neighborhood in New Cairo,

as it characterized by the luxury of its units as well as its residential compounds,

and it contains many service places, we mention them in the following points:

The compound contains the most famous universities in New Cairo,

and the International Higher Institute for Languages ​​and Translation.

It has many distinguished modern schools, such as Green Heights Language School,

the Egyptian Language School, and the Misr International School.

It includes clubs with various playgrounds, suitable for the high society,

There is a great bouquet of the most famous mosques in the Republic,

such as Hassan Al-Sharbatly Mosque, Al-Farouq Mosque, and Quba Mosque.

It contains the finest commercial and recreational malls,

which individuals go to for shopping and also fun, such as Cairo Festival Mall,

features a lot of public parks and also a family garden.

It contains various housing levels, which vary between high-end, medium,

Services that the new compounds are not without.

Living in a compound now considered as living in a luxury room in the most luxurious hotels, due to the services it contains, and its integrated finishes as follows: