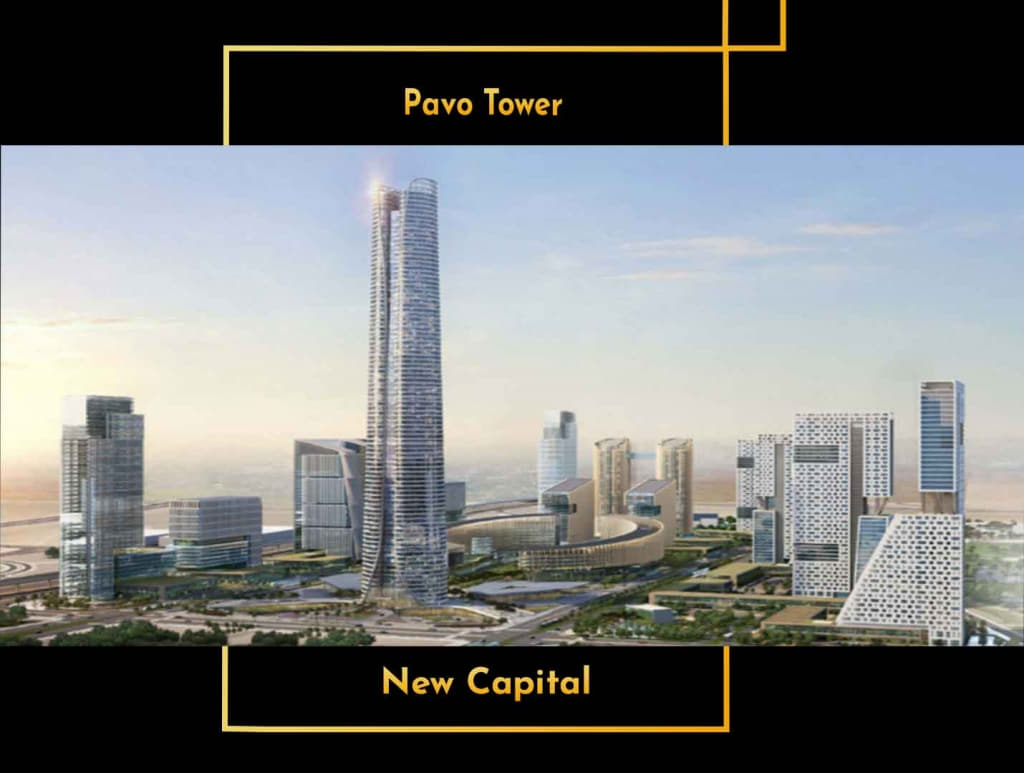 Pavo Tower New Capital It is one of the most distinguished projects in the CBD area,

with a direct view of the iconic tower.

the launch of a project in the heart of the new administrative capital,

and it is one of the most distinguished projects in the CBD area with a direct view of the iconic tower.

the capital within the central business district.

The project also has a wonderful view of the Green River and Bin Zayed North Axis,

and also overlooks a revealing panorama view of the largest garden in CBD.

units at competitive prices that have not been offered before in the central business district at all.

investment in the state of Mercon, where the company announced

the launch of its project in the New Administrative Capital.

with different spaces and prices suitable for everyone.

the New Administrative Capital in order to establish the Pavo Tower Mall,

where the project is located within the CBD center business district,

the Administrative Capital within the commercial district,

and the area contains the largest companies as well as bodies Important held in the capital.

and not only that, but Pavo Tower is located in front of

the Iconic Tower, and the site features did not stop there,

The central business district with a total area of ​​30 acres,

which provides an excellent working environment for all units in the mall.

The new administrative capital is Pavo Tower Mall, a few minutes away from the regional ring road,

Suez Road, as well as the Mohammed bin Zayed axis.

The mall is located near the famous Al-Massa Hotel in the capital,

as well as the central monorail station, as well as Central Park,

and the project is also close to the Dahab market as well as a mosque. Egypt and

Now what are you waiting for, contact us in order to know the prices and also the spaces of Pavo Tower,

the distinguished capital, and do not miss the opportunity and

own a unit within the most prestigious malls in the Central Business District.

the establishment of services as well as public facilities in the project,

the needs of customers within the Paavo Tower project,

and the most important services located within the Paavo Tower are the following:

the lowest residential prices in the real estate field in New Cairo,

compared to many services and facilities available within the compound,

which provide a wide range of entertainment and

the greatest amount of healthy life as well as comfort And also luxury.

The Pavo Tower project in the new administrative capital is a project by Mercon Developments,

a giant company in the field of real estate development in Egypt.

Note that the prices and the spaces mentioned in the article are for the first half of 2021, and therefore they are subject to change, and we are keen to update them constantly in order for the customer to be aware of the changes in the real estate market.

The Central Business District of the New Administrative Capital

the quality of life for all citizens,

and this area includes 20 towers of different uses,

where there are commercial towers, as well as residential towers,

as well as service towers and commercial towers,

and this area is a living model for Egyptian-Chinese cooperation,

Information about the Central Business District in the New Administrative Capital

The area of ​​the central business district in the New Administrative Capital is about 1.71 million square meters, equivalent to about 195 acres,

and its investments are estimated at about $3 billion with a Chinese loan,

where the Urban Communities Authority pays part of it as a down payment,

85% of which was financed from the loan with a grace period.

The construction period was 42 months.

The Minister of Housing stressed that the operation and

project of the central business district in

the New Administrative Capital must be managed in accordance

with international standards for managing and also operating skyscrapers.

To attract huge companies and attract famous brands as well.

The New Administrative Capital is one of the modern projects that were established in Cairo Governorate,

as it is one of the new smart cities that have won the approval and admiration of many investors,

as well as Egyptian businessmen as well as foreigners.

opportunities for young people. To reduce pressure on Cairo Governorate,

as it accommodates the largest number of residents.

The new administrative capital is located between Suez Road and Cairo-Ain Al-Sukhna Road,

on the borders of Badr City. The presidency from old Cairo to the new administrative capital.