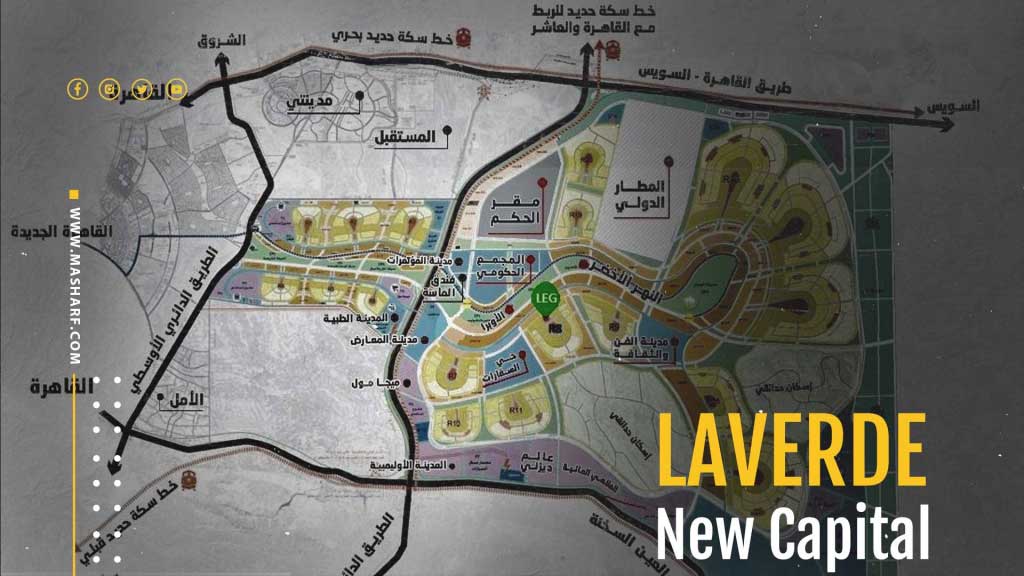 Laverde Company established the La Verde project, the administrative capital, to be within the R8 area,

The developed company is Laverde Egypt Real Estate Company, ten% downpayment and payment of up

La Verde New Capital is characterized by its unique location, as it is in the heart of the New

Therefore, because it is located in the most central places in the capital, the R8 region.

Very close to the Sefarat Neighborhood, the Presidency, the Ministries Quarter, and the Convention Center.

And close to the New Administrative Capital’s helipad.

Just as La Verde, the administrative capital, gives you an attractive view of its privileged location on the Green River.

It is also facing the opera house.

La Verde Police have chosen a privileged location to give you the opportunity to live in La Verde New Capital,

It gives you what you aspire to in terms of tranquility, tranquility and privacy amidst the picturesque natural view. classic designs that combine simplicity and sophistication at the same time.

It was keen to ensure that the urban planning of the La Verde project, the new administrative capital,

Nothing has been overlooked, as the units are close to the services and video they enjoy.

And also the distribution of units and the distances between them so that each unit enjoys its privacy,

and a main gate to the compound.

integrated city that will meet all your and your family’s needs.

The project (La Verde New Capital) is being built on an area of ​​35 acres.

The units in our project consist of (residential units, duplexes, penthouses, and isolated villas).

As for the duplexes, it starts from 270 meters and reaches 346 meters.

And when we talk about the penthouses, the distinct units in the La Verde project, the New Capital

Which contains gardens of various sizes, mostly, and the penthouse areas reach 346 meters.

The dialogue about the merit came about the independent villas, which are of various sizes, reaching

Laverde prices in the new administrative capital of La Verde:

The price per meter in La Verde, the New Capital:

La Verde, the heart of the Administrative Capital, is considered an opportunity to invest in the New Capital,

But the prices of La Verde in the compound are as follows:

Delivery date of the Laverde company:

It is distinguished by the interest in the finishing stage, as it contains clams, plumbing connections,

electric cables, and the apartment door,

That is, finishing 1/2 finishing.

For your convenience, the deadline for delivery is after three years, meaning the date of delivery is 2023

live with the utmost luxury. many supervising projects in the field of real estate investment,

However, with the La Verde project, it overtook itself, and the consultant for the project was Engineer

The company that developed the La Verde project has a lot of payment and installment systems, which are: