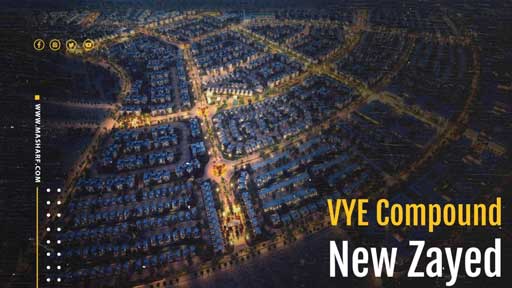 VYE Compound Sheikh Zayed , Sodic is famous and one of the major companies in the field of real estate

development in Egypt and the company occupies a position within the market and won some prizes,

among the most reliable companies in Egypt,

And it is always committed to ending all its work and obligations on time.

The compound is close to Sphinx International Airport, as it is about 6 minutes away from it and is

It is about 12 minutes away from Arkan Mall and 10 minutes from the Grand Egyptian Museum.

The project is on a huge area in the heart of Sheikh Zayed on an area of ​​500 acres, and it did not come

randomly, but rather with a thoughtful plan

Each corner of the space allocated to the compound is to be complete, as it includes five main entrances

to facilitate entry and exit movement,

throughout it and it includes 3 commercial centers.

Information about the project in Sheikh Zayed Compound:

The project area is 500 acres in Sheikh Zayed City.

phase within two days of its offering at a value of EGP 1 billion.

Sodic revealed that it expects to achieve full-stage sales of its project, with a contract value for its units

It is noteworthy that, at the beginning of this year, SODIC signed a partnership agreement with the

And installment over 8 years

Sodic launches its new project in Sheikh Zayed City, and the company is one of the largest and greatest

The company was established in 1996 and has its pioneering projects in Egypt, including: