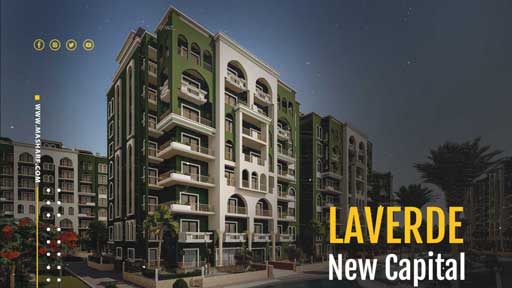 choose it without thinking, so the La Verde site is considered the administrative capital of

the most vital sites,

And due to the company’s ability to choose the locations of all its residential projects, as all statistics

confirmed that the location is the most prominent factor in attracting investors,

And all of that comes to you at very competitive prices, and payment systems represented in the system

of monthly installments, especially for services that prevent its residents from going abroad from it.

La Verde Egypt was distinguished by the selection of La Verde, the administrative capital, with great

consideration, due to the importance of that national residential project.

In which the company showed mastery and originality of design and accuracy of architecture, so it chose

a spot of land very close to the Anakaji site, the Arab Republic of Egypt,

It is located in the R8 residential neighborhood, which is characterized by great vitality,

The most prominent government headquarters, such as the Diplomatic Quarter, which contains many

embassies, in addition to many ministries.

And the important government agencies, within the government district, which contains the presidential

palace, the opera house, and the seminar center. 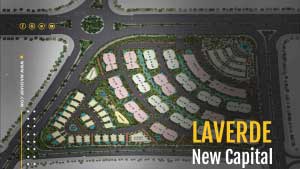 Just as the rest of the facades of La Verde, the Administrative Capital, overlook the luxurious green river,

which is the largest central park in the world.

the aim of creating this huge residential edifice.

features, the aim of which is an attempt to reduce overcrowding.

And to impart excellent view and environmental conditions full of luxury and creativity,

as 22% of the area has allocated only for residential facilities.

Which permeates the buildings and apartments in a cheerful creative style, In addition to make the location of La

Verde the New Capital in the most beautiful way.

As if it were a picture or a painting drawn with masterful creativity,

the area of ​​skill of engineers and designers is clearly evident in the various details of that project.

in the New Administrative Capital.

The value of the apartments in La Verde compound starts from 11,500 EGP per meter.

On the land of the Arab Republic of Egypt, all facades of La Verde, the administrative capital, have been

Just as all of them overlook the most important landmarks of the compound, which  represent by

industrial lakes and green spots that are a pleasure.

to erase any psychological or nervous pressure as soon as you see it.

Paying 8% downpayment and installing the rest of the unit cost over 6 years in La Verde.

Ten% downpayment and installments of the remaining unit cost over 7 years is available.

15% downpayment, 5% payment after six months, and the rest of the unit value in

And which Laverde Company was keen to have the largest amount of benefits in it,

it to meet their needs.

The so-called defect and shortcomings of the La Verde Compound, next to the distinctive

location of La Verde, the administrative capital, will not be the project.

The project included many services that are represented in the following:

Taking into account the provision of all security and safety measures, through the spread

of security and guard persons throughout the day.

In addition With a great multi-storey shopping mall that contains many famous commercial stores.

In addition to that, an important business center and administrative building as well.

An entertainment place for children with the establishment of international nurseries.

In addition A health club with saunas, a jacuzzi, and a spa, as well as a lot of sports equipment.

to the spread of green spaces and artificial lakes.

In addition, there are many garages for the purpose of parking customers’ cars,

to prevent them from being crowded with public methods.

Trails have set aside for joggers, hurricanes and cyclists.

and the finest cafes.

A huge spacious pharmacy is available to serve the various residents of the compound.

In addition to that, a supermarket to meet all customers’ demands and needs.

Cinema theaters with the aim of hiking and watching the finest new cinematic works.

In addition, the rest of the units have been constructed in a manner

that preserves the reason for the privacy of its residents.

established many different apartments in it.

There you will definitely find apartments, penthouses and standalone villas,

in addition to duplex apartments of different sizes.

The spaces were varied as follows:

The ground floor spaces in La Verde compound start from one and a half meters to 203 square meters.

There are consecutive floors areas ranging from one and a half meters to 255 square meters.

with care is the company La Verde Egypt,

became famous among many of the largest real estate companies in the Arab Republic of Egypt.

engineers and designers in that national project.

designs that the company was keen to be the best.

all the residential projects that promoted its establishment.

She was famous for her creativity and her distinct touch on the facades of buildings,

as a feature of the interiors that resemble the most luxurious international compounds.

By living or investing in the units of the La Verde project,

blend the soft traditional character with originality and civilization.

the land of the new administrative capital, which it has set.

A civilizational shift has occurred in the Egyptian society, as real estate investment in

that city helps to increase financial gain in a short period of time.

Just as it provides a lot of effort opportunities and ends unemployment, and that is

why the project implement by Egyptian labor.

the average of living for all people, just as it does not provide apartments for only.

But it also offers commercial and medical units and pharmacies, serving all residents of

the New Capital and enjoying the latest modern technology.

the general atmosphere away from any pollutants.

Just as the largest central park in the world was established, in addition to that

the most important and prominent landmark represented by the Green River.

Which is 35 km long, which plays the role of linking the various neighborhoods of