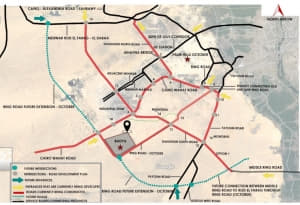 It is considered a residential as well as an industrial city, as it was named after the victory of the Sixth of October in 1973.

The 6th of October City is located 38 square kilometers from the center of Cairo,

and October 6 is characterized by a low population density, as well as a lower air temperature compared to Cairo.

Another disadvantage of 6th of October City is its distance from the center of Cairo,

as well as the congestion of the main road leading to it (26th of July Corridor).

As the 6th of October City is one of the new cities in which the standard of living varies from economical, medium, and luxurious housing.

Among the most prominent landmarks in 6th of October City

The 6th of October City can also be reach through the 26th of July Corridor or the Ring Road.

A brief overview of 6th of October City

It contains many advanced schools, including the Royal International School, Pioneers Language Schools,

One of the most important features of October is that it contains a large number of universities such as the Higher Institute of Engineering, Nile University, Al-Sawaa Canal Academy, Zewail International City, the well-known 6th of October University, and other universities.

For all shopping lovers, you will find the Mall of Arabia in the tourist space, the Mall of the Arab Republic of Egypt on Al Wahat Road, Diamond Mall on the central axis, Cityscape, In addition, Dolphin, the Mall of the 7th District, and other malls that include international brands.

When you wander around the neighborhoods of the 6th of October City, you will find the most amazing apartments that are represent in compounds and vast green spaces that occupy most of the area. You will feel as if you are wandering in a forest filled with greenery, roses, and subtle scents, all of that and more you will find once you book a housing unit within this preferred town.

About the most prestigious projects on the 6th of October City

Centrada Mall is the most luxurious commercial and administrative mall in the 6th of October city.

It is a future project that gives you the possibility to work in a clean atmosphere that enjoys calm and luxury.

Let Centrada Mall be your honorable business address and defend you so that you quickly set out on your way towards peak and victory.

A luxurious and gigantic mall, which is one of the largest malls in the 6th of October city.

For this reason, it was lost. It was built on a great place of about 40 thousand square meters, In addition, It is an area that allows the presence of different areas of units with various purposes.

centrada plaza is characteriz by containing various types of units, which varied between administrative units, medical units, and an area designated for banks and currency exchange companies, In addition, the spaces started from 35 square meters.

west It is located on Al-Wahat Road, directly behind the Media Production City, minutes away from Dahshur Road and 2 km from the Mall of the Arab Republic of Egypt. Enjoy the life of El Gouna in O West in Cairo with all the infrastructure, entertainment, and healthy living means.

Orascom Real Estate Development has been able to implement many real estates projects such as the “El Gouna” project, the “Taba Heights” project in the city of Taba, and the “Bayou” project in Fayoum Governorate. On a thousand acres.

Units’ prices in the compound or West 6th of October

10% downpayment of the unit value, and the rest in installments over 7 years, and all units in the compound will be delivered in 2022.

Badya Compound is considered the latest project of Palm Hills Development within the 6th of October area. The area of ​​Al Badia Compound is one of the most important residential projects in Egypt. The compound has many wonderful services and features to catch the eye and Palm Hills offers customers payment and down payment systems.

It is consider the best among all October projects without downpayment and equal installments over 10 years without interest, and the best projects on the 6th of October are the Badya Palm Hills project.

The Lane Mall 6th of October

This luxury mall is built on a very large area, and offers a full range of housing choices; Excellent villas, town, and twin houses, surrounded by beautifully landscaped lawns and gardens, carefully tree-lined streets, and plenty of green spaces.

Including Accommodation In this upscale complex, there is a sprawling 27-hole golf course. With many initiatives to choose from and services, you can enjoy.

Payment methods at The Lane Mall 6th of October