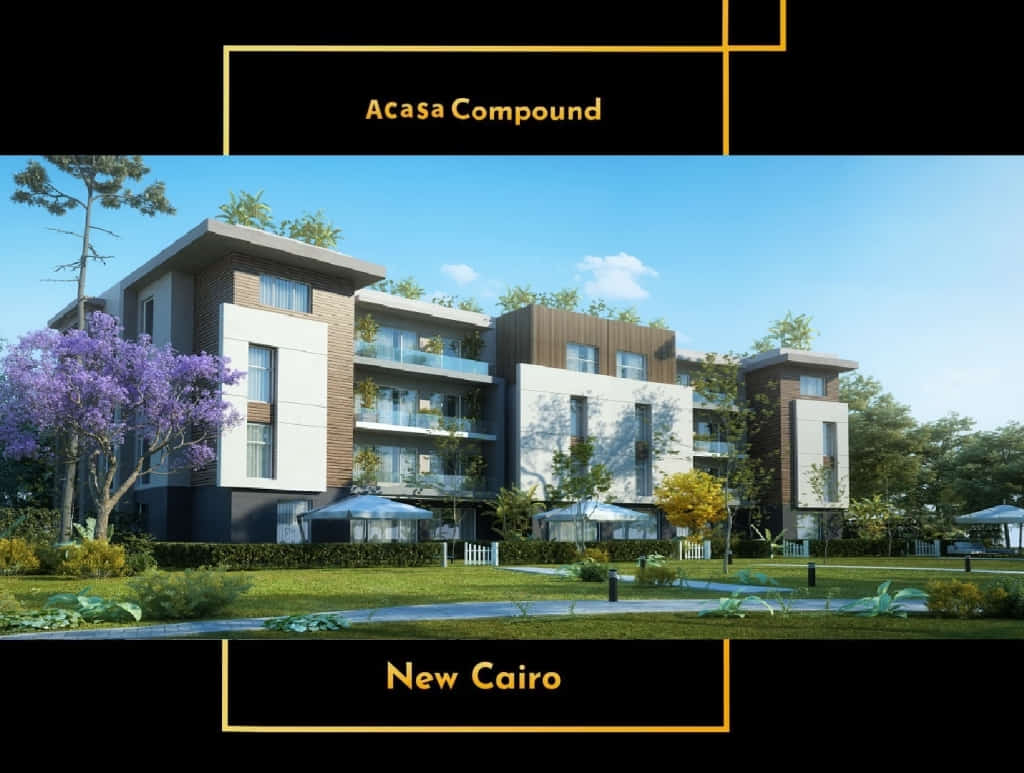 Acasa Compound New Cairo is the largest residential complex in New Cairo by DAR ALAMIA GROUP for real estate development, as it is characterized by a perfect and original architectural design.

AKASA 5th Settlement is one of the most worthy and

as it is characterized by a perfect and original architectural design,

and a wonderful view of the landscape and artificial lakes,

and the similar natural scenic,

the heart of New Cairo, next to The most important main streets in the city,

and its proximity to the various important original companies,

as well as the various roads and transportation through which you can move to the areas of Cairo and its suburbs.

The Akaza Compound in the 5th Settlement offers all other high-end ways of living in terms of services,

the best costs and payment systems that amount to plenty of years,

so don’t be confused and book before it’s too late.

Located in the most distinguished and thriving location in Katameya – Fifth Settlement,

While everything in Acasa is a pleasant walk from your doorstep,

all of the attractions and notable roads in the surrounding area are just a short drive from your home.

Inspired by modern architecture, AKASA comes to you with a different set of unit spaces, starting from 110 m, overlooking an open view of greenery with the feature of our double display, which will raise the level of peace as well as calm

The prices of the Akaza compound in New Cairo are among

the lowest residential prices in the real estate field in

the New Cairo area compared to many of the services and

facilities available within the compound,

which provide a wide range of entertainment and

the greatest amount of health and comfort as well as luxury.

which will be in New Cairo, according to statements by Ahmed Saleh,

Vice Chairman of the company’s board of directors, who indicated that the next project a residential compound built on a very large area of ​​6 acres, at an investment cost. It amounts to about 800 million pounds.

Saleh indicated that the company aims to invest about 5 billion pounds in order to implement a number of projects in East Cairo, as well as the new administrative capital

Dar International for Real Estate Development was established 10 months ago in order to be the real estate development arm of the Dar International Group, which owns sister companies in the field of manufacturing high-end furniture as well as contracting and others.

Regarding the company’s work in the contracting sector, Saleh indicated that the company is implementing a volume of works for others worth 1.5 billion pounds, which is expected to rise to 2 billion pounds by the end of the year.

He pointed out that the contracting company implemented many projects in the administrative capital, including 100 villas in cooperation with one of the sovereign authorities, the two headquarters of Banque Misr and also the Arab Organization for Industrialization, as well as the implementation of 40 buildings with the Ministry of Housing in the Fifth Settlement, as well as four colleges in the new city of Galala. 4 faculties are being implemented at the Japanese University of Borg El Arab, as well as the New Suez Canal University.

Note that the prices as well as the spaces mentioned in the article are for the first half of 2019, and are therefore subject to change, and we at Masharef are keen to update them constantly in order for the customer to be aware of the changes in the real estate market.

Advantages of housing in New Cairo and the Fifth Settlement :

New Cairo is considered one of the most prominent residential cities in Greater Cairo, as it includes the finest residential neighborhoods, including the First Settlement, Al Rehab City, and the Fifth Settlement. The city is a magnet for investors as well as those looking for high-end housing, as it includes all institutions, as well as shops, as well as important local and international malls. The city has many other advantages, which are as follows:

What are the finest neighborhoods of the Fifth Settlement?

Lotus Neighborhood: It is close to the new cities, namely Al-Shorouk City and Madinaty. It also includes many services such as administrative buildings, as well as hotels, the Future University, the American University, gardens, and Americana Plaza.

Al-Andalus neighborhood: It is also located at the entrance to the Fifth Settlement, and it includes many services such as private institutes, as well as sports clubs, as well as gardens, as well as recreational areas, as well as private universities, and a water station.

Al-Kornofil neighborhood: It is one of the most prestigious neighborhoods, as it includes: villas, as well as schools and hospitals.

Narges District: The best neighborhoods in the Fifth Settlement are located in the American University, shopping centers, as well as entertainment centers, Medical Park, Seven Stars Mall, and Silver Star.

Choueifat neighborhood: the best neighborhoods of the Fifth Settlement, as it is located at the entrance to the assembly, and it includes many services and also schools.

Ninety Street: It includes many services such as banks, as well as schools, as well as shopping centers and many international companies, and important services and facilities.

West Arabella: It is located near the 90th Street, and includes many services such as: the German University, the American Schools, the Future Mall, and the Egyptian Language Schools.

Beit Al Watan: It includes the Degla Ney and the Platinum Club.